Learn how to throw with confidence and dominate on the mat with all the modern judo secrets, with Olympic gold medalist and BJJ black belt Satoshi Ishii. 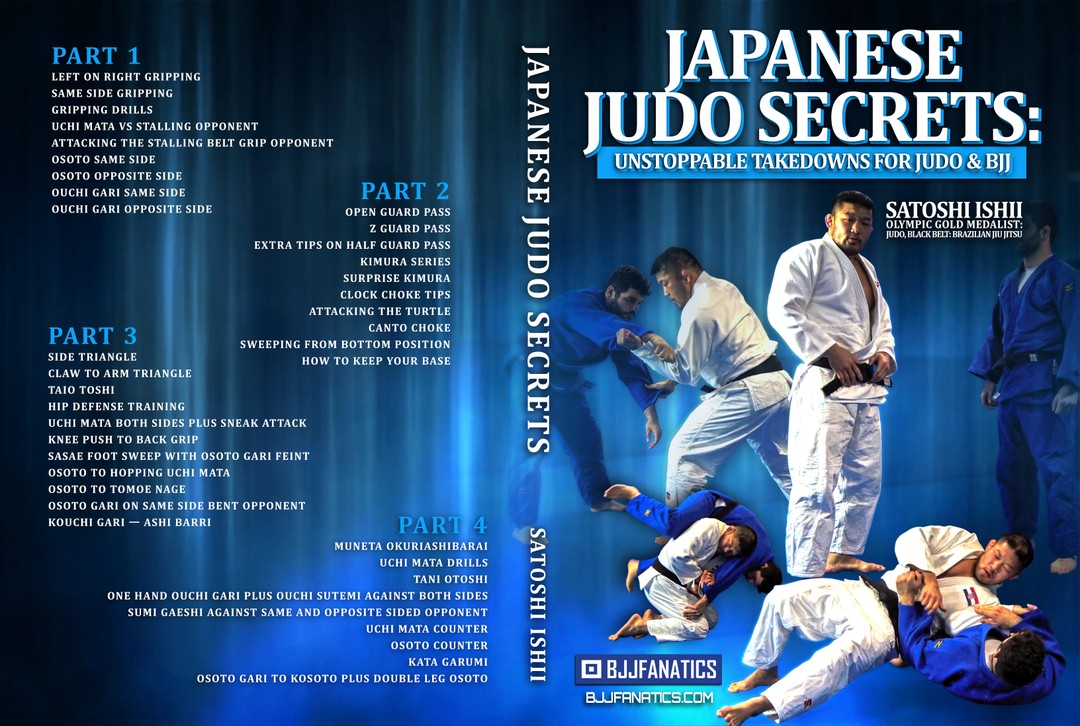 Unlock a whole new modern perspective on BJJ’s most common positions by learning how a champion judoka dominates on the feet and on the mat.

Ishii shows the drills and strategies that he has brought from traditional Japanese judo to train his body for takedowns, giving you a full roadmap on how to fight from the feet and dominate in the grip fighting exchanges. Even after the takedown, see how you can attack the submission with the same focus and quick technique of a judoka.

All the top game fighting in the world won’t get you anywhere if you can’t get the takedowns first, so give yourself a real gameplan around grip fighting, learning how to approach every grip and get in on the most effective throws available. Ishii has learned from a lifetime of competition that an effective grappler must attack both sides, so learn how to throw both sides with osoto garis, ochi garis, uchi matas, and more.

Each throw brings with it the little details that Ishii has mastered, including how to throw someone bigger than you with no extra difficulty. 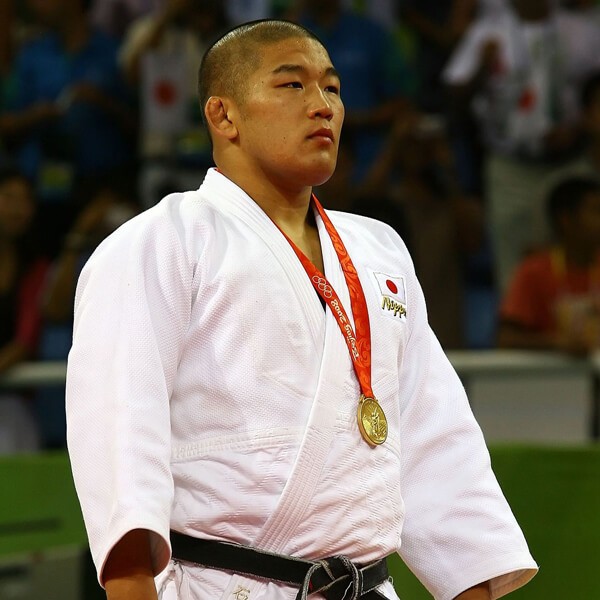 Ishii was raised in some of the most demanding dojos in Japan, and was able to accomplish the impossible in his craft by becoming the youngest and lightest heavyweight champion in Olympic history.

He did this with an iron will and incredible technique that he has transitioned over into jiu jitsu with great success. Now you can learn these judo-based grappling techniques around common BJJ positions like turtle, knee shield, and side control with lots of unorthodox grappling techniques that are already battle-tested and ready for you to start implementing.

Judo emphasizes dominant throws on the feet and aggressive submission threats on the mat, and these little changes in mentality can be a great change of pace in BJJ. These throw combinations are simple and easy to follow, with a straight forward formula about what to attack in series while you hunt for the takedown.

None of these throws need you to be bigger and stronger than anyone, instead of will see how to manipulate someone’s weight and balance so that you can rely on your throws instead of having to muscle through a position. Hop into this judo masterclass with an Olympic champion!

In BJJ, throws can be rare because people are careful about exposing their back while they drop in on seio nages. Instead, Ishii has gone the other way and made a full series around how he can still get to his hip throws and trips while never exposing his back.

The real plan is all in the steps and how you can always be working from one side to the other, combining uchi matas with osoto garis and his signature ochi gari attack to constantly shift his partner’s base and set up his next attack. 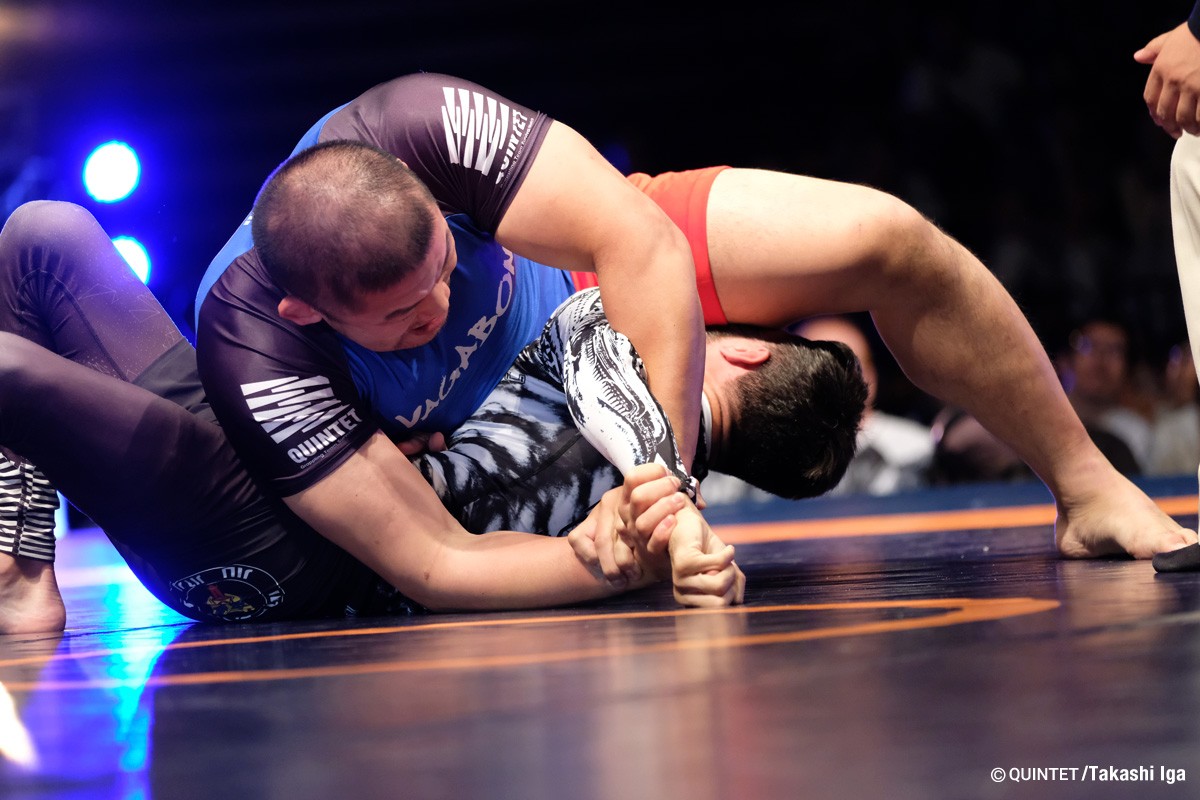 -Usually most people get caught up way before they actually try to throw someone, because they can’t get the grip fighting right to put themselves in position. Learn how you should grip and move whether your opponent is matching your stance or not, and how you can address any problematic grips on your sleeves, collars, or back. Only after you have this nailed can you get to work on taking someone down, so make sure you see just what Satoshi is doing in each exchange.

-Judokas tend to attack submissions very differently than BJJ players, often using much more simplified and straightforward technique that can be as painful as it is effective. See the judo-based submission threats that Ishii has made staples of his game, including a wicked clock choke from turtle and the very overlooked Canto choke, made famous by judo champion Flavio Canto. By using a strong collar grip from knee shield, you can launch yourself into one of the sneakiest chokes in the game and one that Ishii was shown personally by Canto. Also make sure you see the combination attack that Ishii uses when someone holds on during a kimura, using their lapel against them to leave them tied up and unable to defend your chokes.

-It’s not just enough to know the moves, you have to train your body to perform the movements the right way. See all of the drills that Ishii did throughout his judo career in Japan, teaching himself the grip fighting sequences and hip movements that he needed to excel. With some work and patience, you can learn all the subtle actions and reactions that you need to be throwing people consistently. 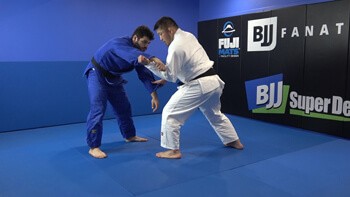 Here Satoshi demonstrated a standing grip break.  This will lead him into a throw utilizing double sleeve control. 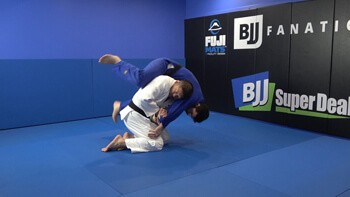 He has secured the double sleeve control and he will drop to both knees in order to minimize his back exposure. 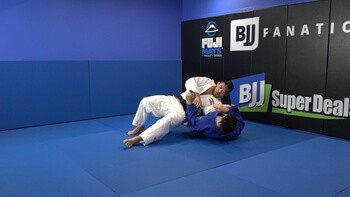 Satoshi has secured not only a throw but a guard pass.  Notice how he keeps his hip off the ground to maximize his pressure. 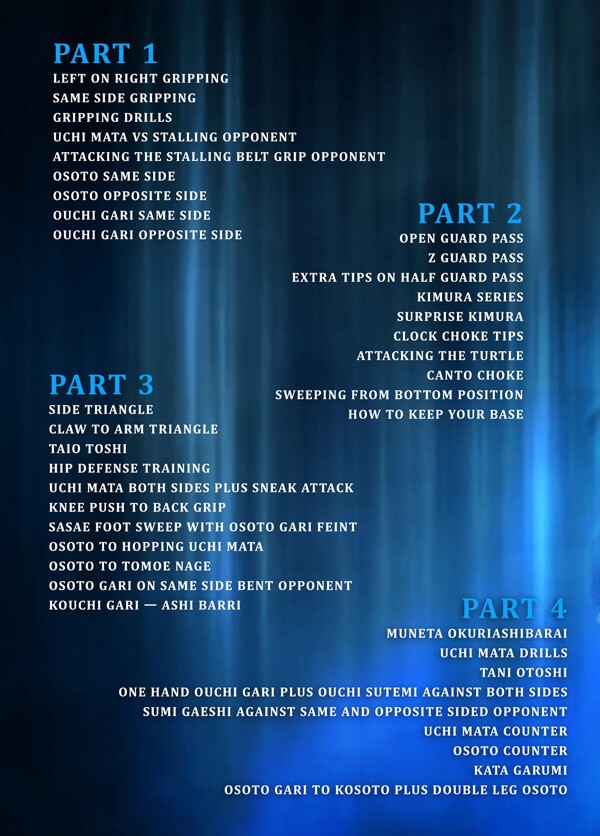 So what does it all cost?

Well, that depends, what is it worth to learn the secrets of an Olympic Judo Gold Medalist?