How To Sweep Bigger Guys With The Half Guard That Actually Works Better Against Heavier Opponents. 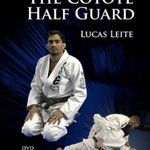 My guard used to get passed fairly easily but now I feel a lot more comfortable on the bottom now and it's been harder for opponents to pass my guard. Also, I don't mind pulling half guard against bigger dudes or getting squashed by them now. I was getting squashed in half guard by an opponent who was 40 kgs heavier than me, but I managed to get the underhook, fished for the coyote, took his back and then choke him out.