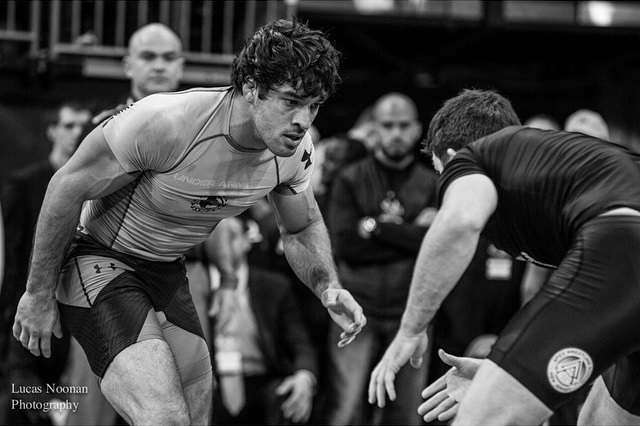 Gregor Gracie is a Brazilian Jiu Jitsu black belt under Renzo Gracie. Gregor is not actually a member of the Gracie family by blood. His real name is Gregor Rangel, and he is the half brother of Rolles and Igor Gracie, who are both sons of the legendary Rolls Gracie. Gregor is a former world champion in the lower belt divisions. He has also had a successful career in MMA (Mixed Martial Arts). Gregor has also competed in free style wrestling. Once of his more notable wins was over Darryl Christian, who is a highly accomplished wrestler.

Learn The Simple Fundamental Brazilian Jiu Jitsu That Has Allowed Gregor Gracie To Become One Of His Family’s Best Competitors.

These Easy To Learn Concepts Work At Any Belt Level – White To Black As Well As For Any Age- Old Or Young.

Gregor Gracie hasn’t had an easy life, but he has an advantage that most any serious grappler would kill for: He’s a Gracie. His family invented and perfected this system of Jiu Jitsu, spread it throughout the world and changed Martial Arts more than any other family in history.

Gregor Gracie hasn’t had an easy life, but he has an advantage that most any serious grappler would kill for: He’s a Gracie. His family invented and perfected this system of Jiu Jitsu, spread it throughout the world and changed Martial Arts more than any other family in history. They are a lot like most families in one respect though: they want their own family members to be the best. In Jiu Jitsu, everything Is earned, nothing is given ... but it does help to have the best instructors in your family making sure you learn everything right along the way. For the Gracies, Jiu Jitsu is all about efficiency. It is a very simple game: Use the most efficient moves and concepts + minimum effort and maximum efficiency in every spot.

Gregor Gracie was born on December 26th 1985. Gregor is the son of Angela Gracie (widow of Rolls Gracie). He is a half brother to both sons of Rolls Gracie, Igor and Rolles Gracie.  Gregor was always in contact with the Gracie family while growing up and he soon began training Brazilian Jiu Jitsu with Rillion and Carlos Gracie Jr. Though Gregor was naturally talented at Brazilian Jiu Jitsu, he did not take it very serious while growing up. It was only when he reached purple belt level did he decide to follow in his old brother’s footsteps and try to make a living off of jiu jitsu. Gracie split most of his time between his mother’s house in Rio de Janeiro and New York, where his brothers established their training camp. While in Rio de Janeiro, Gregor Gracie would spend his time training at the Gracie Barra Academy. When he was in New York he would train out of the Renzo Gracie Academy.

As Gregor was already a very well established grappler, he spent time helping Renzo Gracie’s IFL team prepare for their MMA tournament. It was here that Gregor would take up his interest in Mixed Martial Arts, having sized himself up against some of MMA’s best competitors. Gregor’s mixed martial arts debut took place in 2007 with a submission victory over Josh Lydell. Gregor would continue his career with all victories by submission in his record until mid 2011 with a record of 5 – 1 – 0. Since then, Gracie has also successfully entered the world of fashion. He has modeled for high profile advertising campaigns such as the Marc Jacobs swim wear. His love life has also made the tabloids of some of Brazil’s most notorious gossip magazines after Gregor’s involvement with stunning Brazilian model Fernanda Paes Leme.

Did you enjoy reading about Gregor Gracie? Then consider checking: