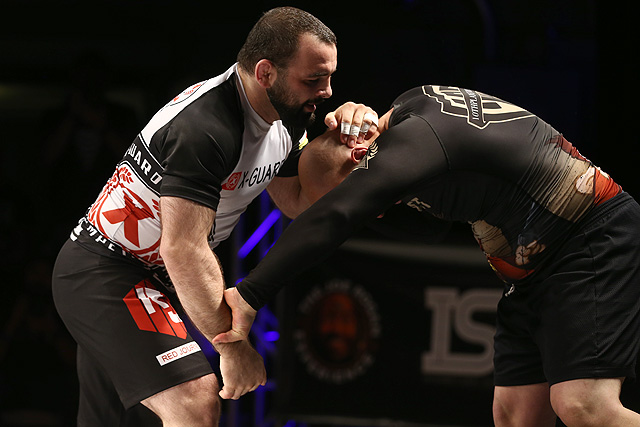 Rustam Chsiev is a Pro MMA Fighter out of Vladikavkaz, Russia. Rustam’s nickname is “Russian Bear” given to him by his teammates for his strength as a grappler. His current professional record is 2- 2 – 0. Hailing from North Ossetia, Russia, Rustam has a background in freestyle wrestling. Rustam has also had much success as a submission grappler having competed in both NAGA and ADCC events. Rustam is a wrestling and grappling coach at KDojo in New Jersey in the United States.

Rustam Chsiev started training in freestyle wrestling in Vladikavkaz, Russia when he was 10 years old. It is a common misconception that he has a background in Sambo. Rustam moved to the United States in 2008 and began training at KDojo in New Jersey where he still trains today. His coach is Murat Keshtov. Chsiev works very hard at the technical aspects of grappling, constantly developing with every tournament he competes at. Rustam Chsiev has also had a short career as a professional MMA fighter. His current record is 2 wins and 2 losses. He holds wins over Igor Litoshik and Giorgi Lobzhanidze.

Rustam is one of the most successful wrestlers to have ever made the jump to submission grappling. A force of nature, Chsiev has beaten some of the best jiu jitsu athletes in the world at their own sport, including Rafael Lovato Jr. (IBJJF world champion and ADCC silver medallist), Romulo Barral (ADCC and IBJJF World champion) as well as Davi Ramos (ADCC champion), to name a few.

The Russian Head and Arm Smother by Rustam Chsiev