Improve Your Half Guard With These 5 Tips

There seems to be a love / hate relationship with the half guard in Brazilian Jiu Jitsu. Several top competitors are known for their half guards, such as Bernardo Faria, Jeff Glover, Minotauro Nogueira, Tom Deblass, and Caio Terra. But many others in the community tend to shy away from the position and favoring more the open guards. The half guard didn’t even gain any recognition as a strong attacking position until the early 90’s when Roberto “Gordo” Correa, unable to use full guard effectively due to an injury, revolutionized the half guard game and introduced the underhook.

With the underhook now established as the preferred position for half guard, the position changed dramatically from a pure defensive holding position to a dynamic attacking position ripe with sweeps and back takes.

As a smaller grappler, I tend to find the half guard to be a much more efficient attacking position than the full guard. In the half guard the lower on the leg you can get, the more dangerous you will be. This is incredibly effective against larger opponents; you are using your entire body against one of their legs instead of fighting their entire body. If you can get low on that leg and start making angles as Bernardo and Tom show in this video, your opponents will have no choice but to go to their butts conceding a sweep. And if you have any wrestling experience, the half guard is definitely for you.

Half guard should not be a position to be ignored. Yes you can, and probably will be, smashed a lot while playing half guard. But if you learn to embrace the suck of being smashed, and find ways to utilized minimum amounts of space to get on your side and find angles, you will be a devastating sweeper and back taker. You’ll be able to find the maximum amount of leverage while using your entire body against a single limb and your opponents won’t be able to overcome that. Let’s start winning some world championships with our half guard. Oss

The Half Guard is one of the most important positions in jiu jitsu, MMA and submission grappling. Dive further into the hald guard with Tom DeBlass and his DVD / On Demand series called Half Guard Domination. Here's what you will learn: 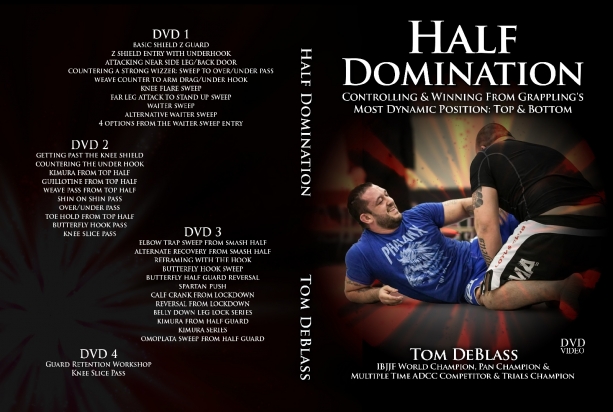