Is this the NEW Kimura?

The kimura was a very common technique in Japanese Jujitsu, and when Masahiko Kimura, the judoka defeated Helio Gracie in a grappling match, by way of gyaku ude-garami, now known as "The Kimura" became one of the most recognizable and powerful techniques in all of grappling.

Today we are going to take a look at the “new kimura” by Satoshi Ishii and Bernardo Faria. Watch the video below and then we will break down his technique. Check it out!

Ishii starts the new kimura from side control position. Notice his grip is much different than the traditional kimura grip. Satoshi wraps around his training partner’s arm with an over hook and connects it to his bicep. He uses his other arm to slice over his opponent’s arm, putting his hand on his elbow. From here all you have to do is make it tight. Look at how quick Bernardo taps! It does not take much motion at all to finish this kimura. Also take note that there are a few different spots from side control that you can hit this kimura from. Pass your training partners head to make this kimura even more brutal! This is a really cool kimura technique from Satoshi Ishii.

The kimura attack is one of the majoe concepts John Danaher teaches his Danaher Death Squad team.   According to Danaher, the Kimura has an incredible versatility factor due to the fact that it can be utilized in both Gi and No Gi and it is an extremely popular hold in MMA.  There have been countless UFC fights finished by way of Kimura.  Mastering this position will give the Jiu Jiteiro a weapon that can be used in all competition rule sets. Below we see John Danaher's student, Georges St. Pierre utilizing the Kimura in the highest levels of combat. 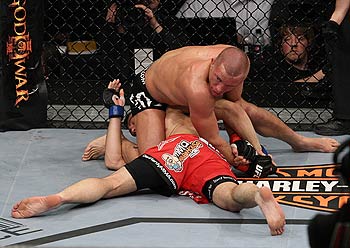